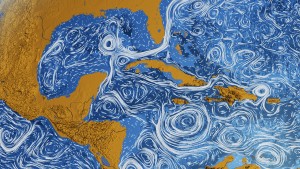 The ocean is crucial element of the Earth’s climate system. The ocean, together with the atmosphere, transports heat away from the equator toward higher latitudes thereby keeping the equator to pole temperature difference to less than 40 degree Celsius–in the absence of the ocean and atmosphere the temperature difference would exceed 100degree Celsius. The ocean stores 60 times more carbon than the atmosphere thereby keeping the greenhouse effect at bay. The ocean is also a key regulator of life on our planet: ocean phytoplankton generates half of the oxygen we breath. Our group is interested in understanding how the ocean achieves these global effects. This requires understanding the physics that drives large scale currents on scales of thousand of kilometers down to the swirls that mix waters on scales of millimeters. This is well illustrated in the image above, which shows the chaotic nature of the surface currents along the easter US coast. The image was generated by NASA using a simulation run with the MIT general circulation model as part of the ECCO project.

You can read more about our research on ocean dynamics by using the navigation menu to explore the topics below: